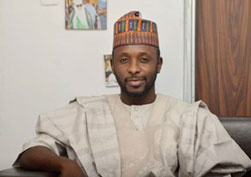 Muhammad Sani Abdullahi  has over a decade of experience in development policy formulation, public finance and project implementation, Muhammad is the current Chief of Staff to the Governor of Kaduna State (population 10 million). In this position, he leads support to the Governor in designing, coordinating and implementing government policy in all sectors. In addition, he chairs the Infrastructure Council of the State which coordinates the portfolio of all economic and social infrastructure across the 23 Local Governments of Kaduna.

In June 2018, he was appointed a Member of the World Bank Global Expert Advisory Council on Citizen Engagement. A position he holds concurrently.

He was from 2015-2019 the Commissioner for Budget and Planning in Kaduna State where he led on the States broad economic growth and development portfolio. As the Commissioner, he was responsible for designing the fiscal strategy and coordinating the implementation and monitoring of the state budget.

Before moving to Kaduna, Muhammad was a Policy Adviser in the Executive Office of United Nations Secretary General Ban Ki-Moon in New York and a member of the Secretary General’s core team that designed the Sustainable Development Goals (SDGs).

He has also served in the past as an Economist and Deputy National Program Manager in Nigeria’s Presidency where he supported the design and coordination of development interventions across 36 States focusing on accelerating the country’s progress on the MDGs. He was subsequently appointed Economic Adviser of the Nigeria Governor’s Forum, a political and policy think tank for the country’s 36 elected Governors.

Currently pursuing a PhD in Economics, Muhammad holds an MSc in Development Economics and Policy from the University of Manchester and has studied Public Finance at the London School of Economics, Sustainable Development with Columbia University in New York and Advanced Project Management at Oxford University in the United Kingdom. He is a UK Chevening Scholar, member of the University of Oxford Business Alumni Network, Fellow of the Archbishop Tutu Leadership Institute, a fellow of the Aspen Institute Africa Leadership program and most recently attended the prestigious Georgetown Leadership Seminar.

He is married and is a proud father to three very energetic boys.